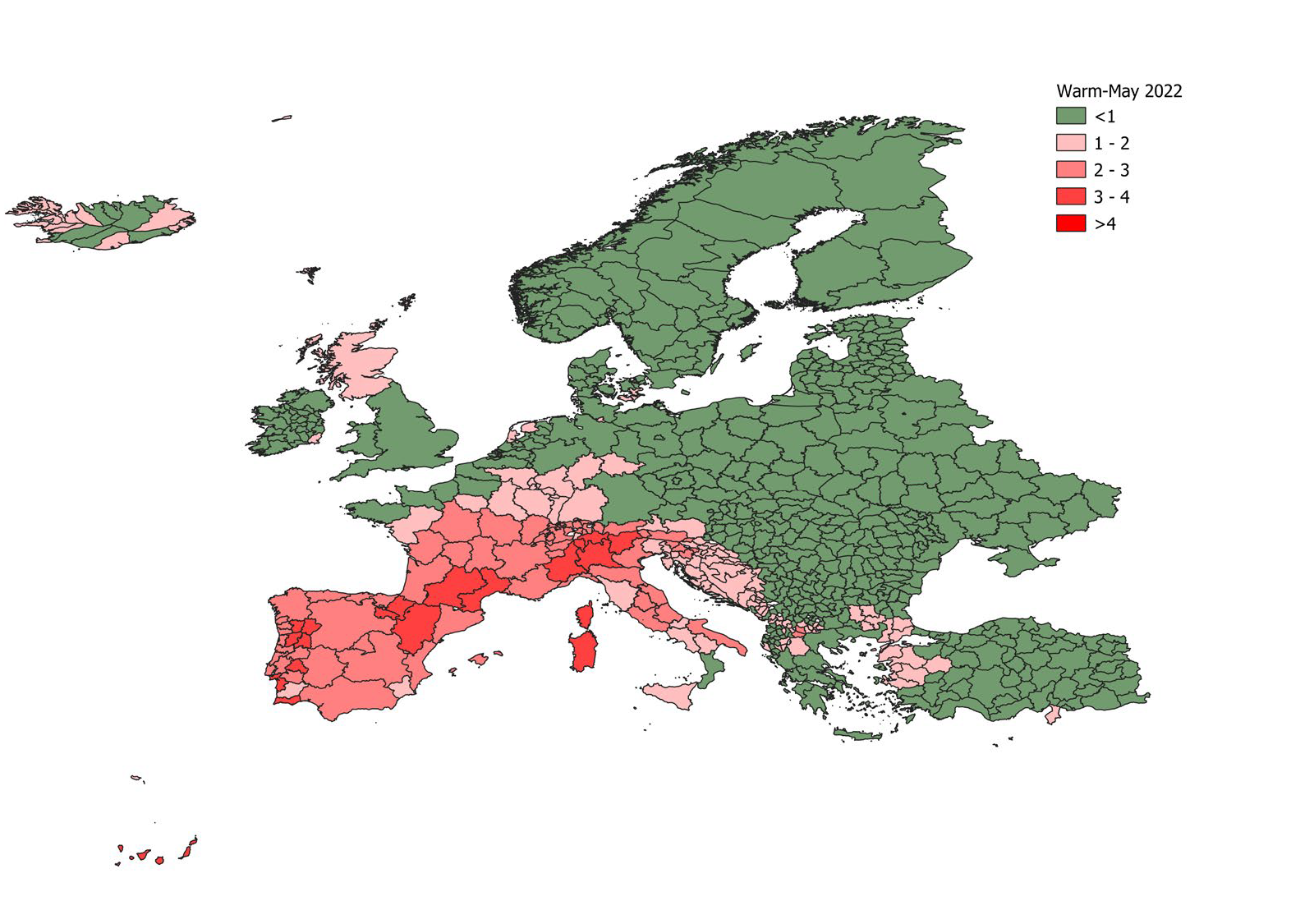 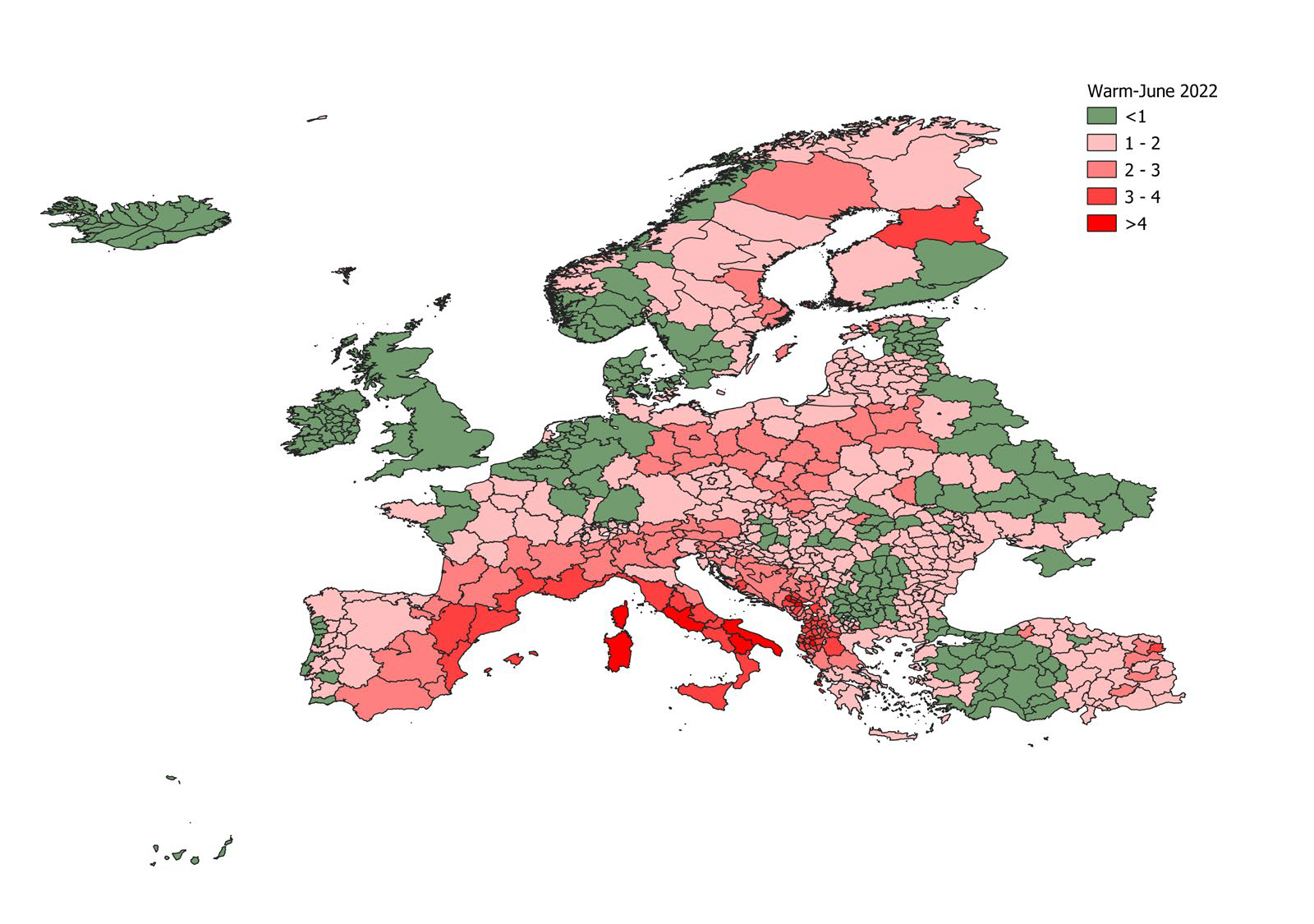 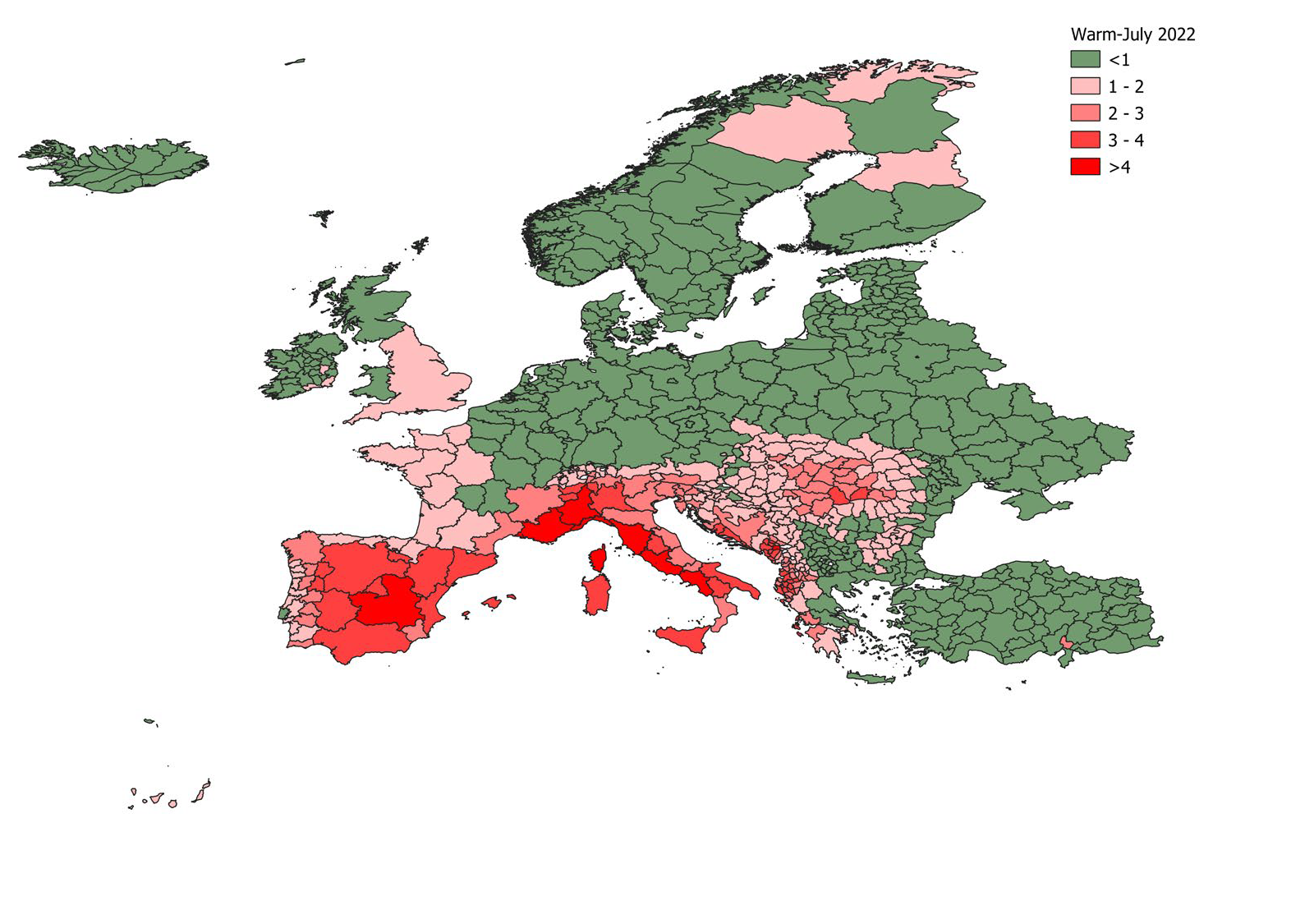 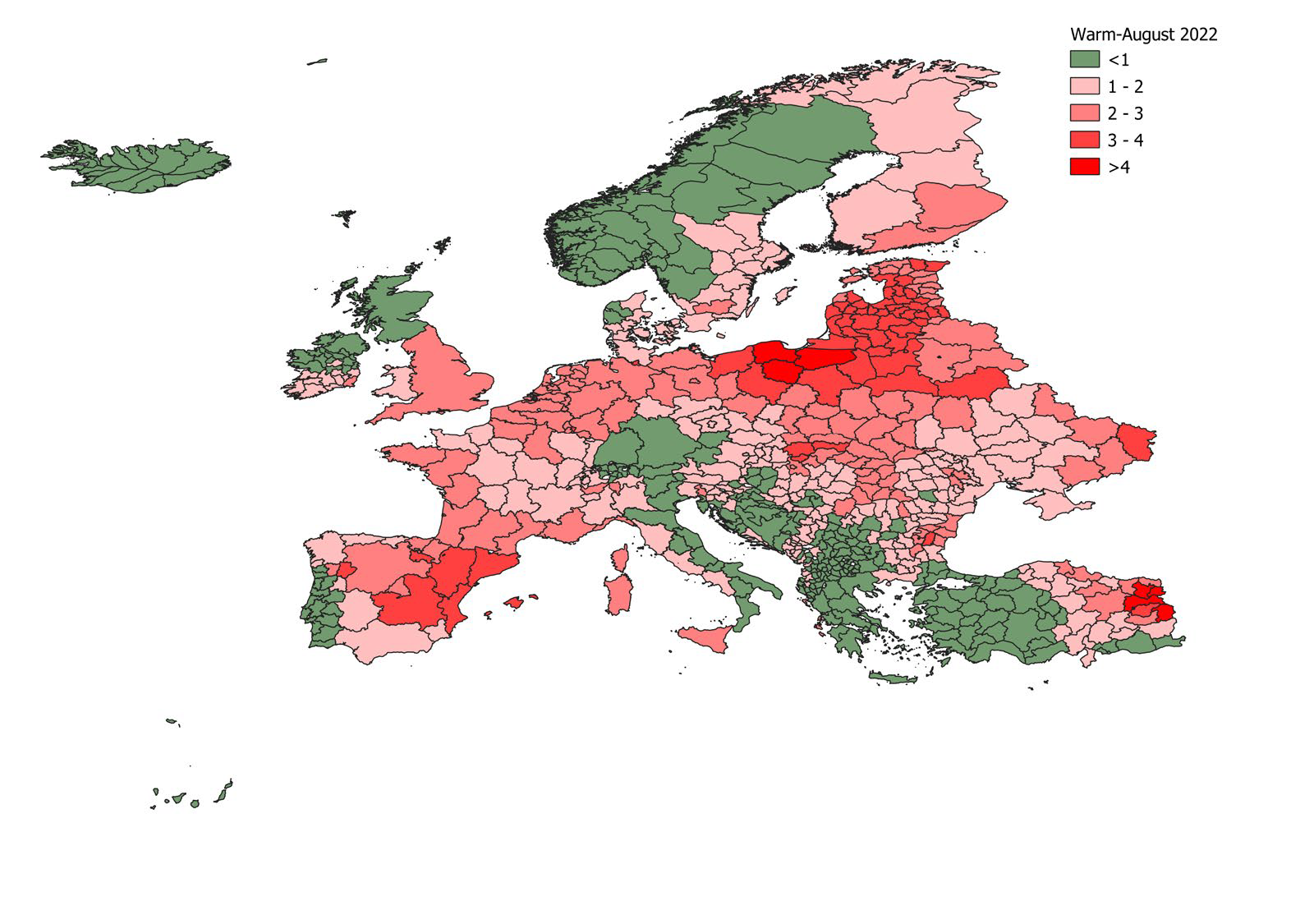 About the heat stress events
Many European nations experienced severe and unprecedented heat throughout the summer of 2022. In fact, summer 2022 was the Europe’s hottest on record, with the highest temperature from June to August by substantial margins of 0.8°C over 2018 for August and 0.4°C over 2021 for the entire summer. Globally, May was the fifth warmest on record with temperatures much above average, associated with a heatwave which broke national and local records for daily maximum and minimum temperatures.  The global average temperature for June 2022 was about 0.32ºC higher than the 1991-2020 average, and Europe had its second warmest June on record at about 1.6ºC above average. July 2022 was one of three warmest Julys on record, close to 0.4°C above the 1991-2020 reference period. This was the joint sixth warmest July for Europe; heatwave brings local and national records to the western and northern parts of the continent. Finally, August 2022 was the joint 3rd warmest, with the average temperature being 0.3°C higher than the 1991-2020 average for the month.

E3CI index on HEAT STRESS
One among the indicators composing E3CI is specifically tailored to detect heat stress conditions. In particular, this indicator is aimed at returning information about the anomaly in frequencies of days for which daily maximum temperature exceeds the 95th percentile computed for the period (a time window of 5 days is adopted). Figure 1 refers to May – August 2022 and it shows the areas most affected by heat, with dark-red colours for the most impacted regions, and light-red colours for those still impacted, but with lower significance. In relation to heat stress, all the impacted regions are characterized by E3CI values higher than 1, which imply an adequate representation of the phenomenon by the index. For example, record-breaking values for heat stress indicator in August are primarily assessed in North-East Europe (i.e., Finland and Baltic Countries). On the other side, the most severe conditions  – in terms of persistence – are more concentrated among the western Mediterranean regions throughout the entire period. These results are in accordance with other weather database sources, such as ECMWF and COPERNICUS.

Impacts and Damages
To date, temperature rises already revealed profound heat stress impacts experienced by human populations, with prolonged and more frequent heatwaves and new emerging threats in various sectors, such as water sources, energy sector, agriculture, forests (i.e., forest fires), and public health, among others.
In relation to water sources, the hot and dry conditions which characterized the summer exacerbated the drought problems already present, with many reservoirs experiencing extremely low storage levels during the summer season, after a very dry winter. The strongest consequences were visible in rivers, and in lakes and aquifers. According to the European Earth Observatory (EDO), the Combined Drought Indicator highlighted a percentage equal to 43 of the EU territory in “warning” conditions and equal to 21 under “alert” conditions, in August 2022. As a prove of that, for example, the Italian Head of the Civil Protection Department stated that the volume of water in the Po river (Italy’s longest river), was up to 80 per cent lower than normal. Another critical front that is alarming is the snow cover, which at high altitudes disappeared already in May – two months earlier than normal – leaving the glaciers exposed. Consequently, the low snow cover in the Alps further exacerbates the water shortage in valley and lowland areas and melting snow and ice lead to disastrous impacts. In fact, on the 3rd of July, the aforementioned conditions contributed to the collapse of a portion of the Marmolada glacier in the Dolomites. The avalanche of snow, ice and rock killed 11 hikers.
In the energy sector, the heat added pressure to the already volatile commodity markets. Electricity and natural gas prices rose across Europe as the heat wave increased demand for cooling, further reducing stocks (exacerbating the already existing situation resulting from the war between Ukraine and Russia). In France, Electricite de France SA has stated it may be forced to cut production since the water needed to cool the plants is not enough. Hydropower plants in Spain and Italy also experienced a drop in production due to heat and drought conditions, and this had serious implications for energy production and availability/prices. To understand the potential damage, it may be useful to highlight that Spain generates more than 10% of its electricity from hydropower plants, so indirect effects of this can be of significance entity.
Within the agricultural sector, the temperatures caused maize crops across Western Europe to suffer, just as they enter the key pollination phase. According to Paris-based Agritel in France, such circumstances have resulted in reduced wheat harvests throughout Western Europe, particularly in France, Spain, and Portugal. In western Europe, already suffering from a severe drought, the heat wave fueled the fires that raged in Portugal, Spain, and parts of France. As an example, in Portugal, more than 3,000 hectares burned in the city of Leiria.
Finally, on the health side, specific mortality and morbidity estimates have not yet been elaborated since summer is still in progress. However, it is a certainty that the continuous progression of heat implies more adverse conditions for the human body and the economy itself.  In particular, the last report published by the Centre for Research on the Epidemiology of Disasters (CRED) in 2021, highlighted how, between all the natural disasters, extreme temperature events were responsible for 5.6 billions ($) and of about 1.044 deaths worldwide. In this context, in a study published by Gasparrini et al. (2015), highlighted how Italy is the country (worldwide) characterized by the highest fraction of all-cause mortality attributable to moderate and extreme heat, then followed by Spain when considering Europe. Therefore, these conditions undoubtedly entail very high risks for these countries. Therefore, to address these risks, heat wave warning systems are already active in several European states and cities, with higher priority to the most vulnerable population (such as the elderly, the isolated, and the already diseased), when possible.