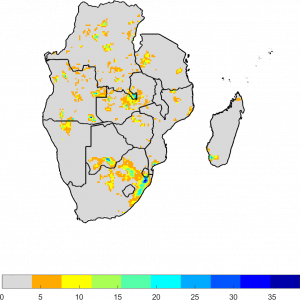 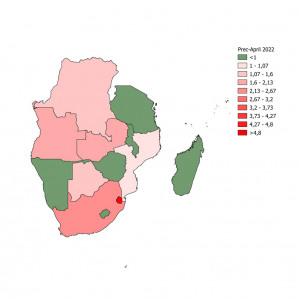 Fig.1 | Spatial distribution of heavy precipitation and grid point scale and at Country from E3CI component for heavy rainfall in April 2022

Regions impacted by the heavy precipitation events:
On 9-13 April, severe flooding and landslides caused by heavy rainfall affected southern and south-eastern South Africa, particularly the Provinces of KwaZulu-Natal and Eastern Cape. The South- African government defined it “one of the worst weather storms in the history of our country.”

About the extreme precipitation event
In April 2022, specifically from the 9th to the 13th, a heavy rainfall event affected the south-eastern South Africa regions. In particular, Margate, Durban, Sezela, Mount Edgecombe all received more than 300 mm of rain in 24 hrs to 11 April. The storm produced almost the usual rainfall for an entire year in 48 hours. This new disaster comes after three tropical cyclones and two tropical storms over south-east Africa in just six weeks earlier this year.

E3CI index on HEAVY PRECIPITATION
One among the indicators composing E3CI is specifically tailored to detect heavy precipitation dynamics. Specifically, for each month, the extreme precipitation indicator calculates the 95th percentile of daily precipitation in the reference period 1981-2010 . Subsequently, the exceedance value at monthly basis is computed and standardized to make it comparable with any other area and period. All the values are computed at grid point scale and after aggregated over the administrative unit of interest. The Figure returns the values of the as computed at grid point scale and at Country level (as made freely available for all the components and different Domains). The higher resolution map clearly identifies the affected area and, specifically, the severity of the event over them: for localized territories, the values  in various shades of blue go beyond 20 and then, the cumulative values over the 95th thresholds are much larger than those potentially associated with the interannual variability. Overall, in accordance with the observations, the Provinces of KwaZulu-Natal results to be the most impacted area by the E3Ci index, followed by a mixed area within the Eastern, the Western and the Northern Cape.

Impacts and Damages
After three days of heavy rain that hit South Africa in mid-April, the country decided to declare a State of National Disaster.  The South African Weather service said it was one of the most intense floods recorded in the last 60 years. More than 100,000 people were affected, school closures, thousands of private properties and infrastructure were destroyed, and hundreds of people tragically lost their lives. According to the national authorities, 123,808 people were affected, 448 died and over 30,000 were displaced, mostly in collective evacuation centres. Rescue teams, including volunteers from the South African Red Cross Society, have been mobilised in the affected areas to search for the missing and bring others to safety. Moreover, according to KwaZulu-Natal’s Cooperative Governance and Traditional Affairs Department (KZN COGTA), disaster management teams responded to a number of other incidents, including landslides in KwaDukuza and flooding in Ladysmith. Flooding was also reported in coastal areas, including Kingsburgh. In term of estimated damages, while repairs in the flood-affected areas continue, estimates for the rehabilitation of the railway infrastructure alone have been estimated by the Passenger Rail Agency of South Africa (PRASA) at between USD 164 and 183 million.