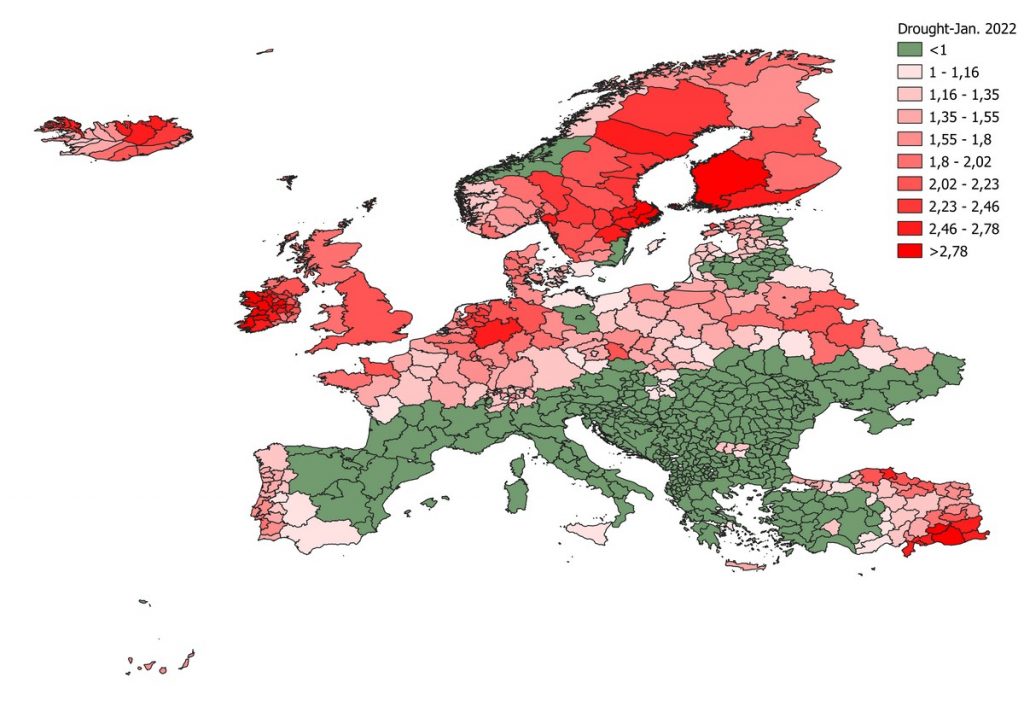 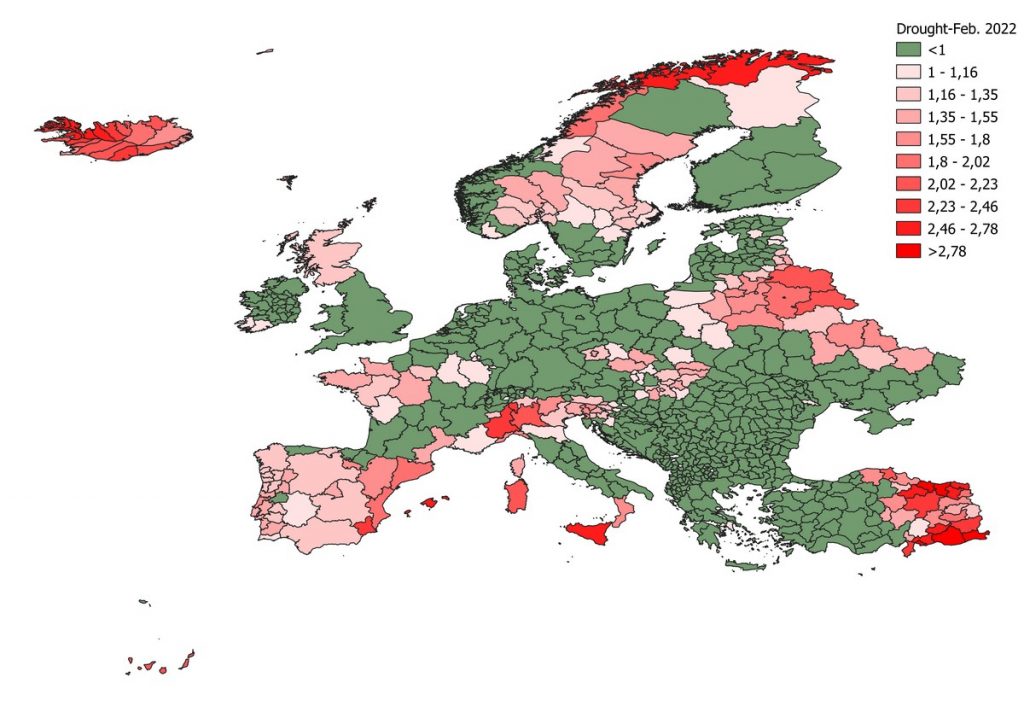 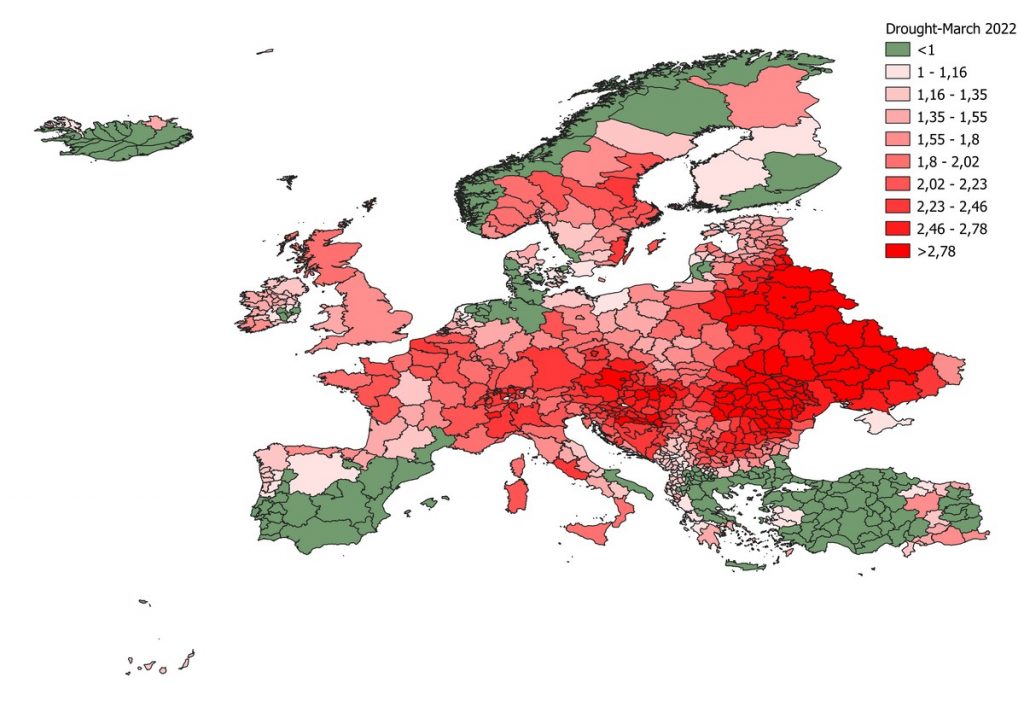 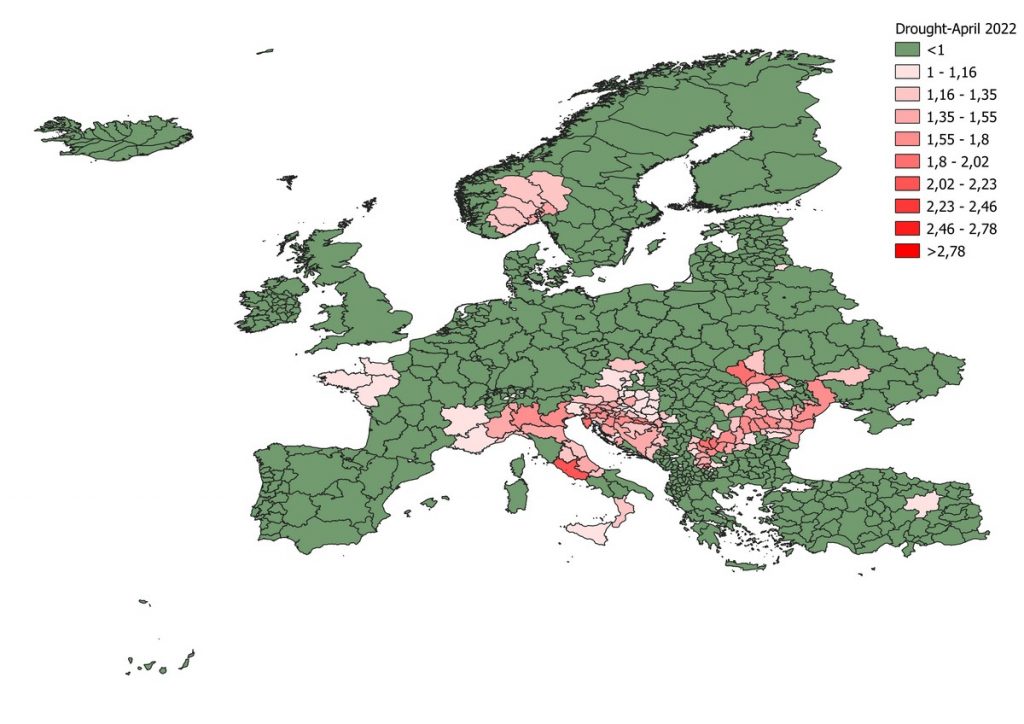 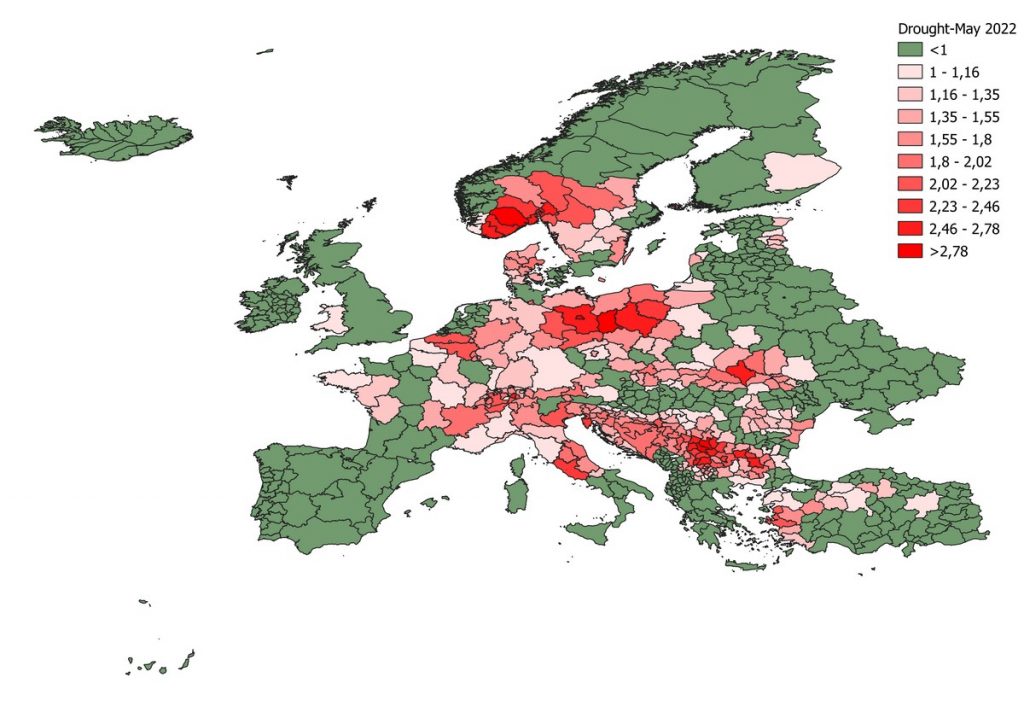 Fig.1 | Spatial distribution of drought based on E3CI for January-March 2022

Regions impacted by the drought:
Most of Europe, more specifically Norway, the Alpine arc, the northern Italy (especially in the Po Valley), the southern of Sweden, Greece, and parts of the Balkans.  In other regions, such as the northern Scandinavia, Turkey, the regions in the northwest of the Caspian Sea, and the Iberian Peninsula, experienced monthly above-average precipitation, which contrasted sharply with the much drier-than-average long-lasting conditions as recorded in February, causing several physical and economical damages.

About the drought
During the first months of 2022, most of Europe experienced drier than average conditions. More in detail, during March, in several Countries precipitation was significantly lower than average exacerbating the already critical conditions observed since the beginning of the Winter season.

E3CI index on DROUGHT
One among the indicators composing E3CI is specifically tailored to detect drought conditions. Specifically, Standardized Precipitation Index (SPI) with a rainfall accumulation period of 3 months is adopted. It is largely exploited in the literature and in the different regional and international operational dashboards to monitor the drought dynamics. Anyway, to maintain the consistency with the other components according to which the larger the value, the more significant the impact, the opposite of canonical SPI-3 is used as component. Furthermore, the baseline period is 1981-2010. The maps refer to the first three months of 2022 and they show the areas more impacted by rainfall deficit, with dark-red colours for the most impacted regions, and light-red colours for those still impacted, but with lower values. Furthermore, the most severe conditions are not concomitant: the Iberian Peninsula experience the largest and the most severe conditions in February, for example, while, over Europe, March seems to be the month over which the highest values are reached over large areas. Overall, the most impacted areas are not concentrated in one or more countries, but they are spatially diversified across the EU area.

Impacts and Damages
In the past century, 45 major drought events have occurred in Europe, affecting millions of people, and causing economic losses of more than USD 27.8 billion. Nowadays, an annual average of 15% of the land and 17% of the EU population is affected by droughts.
The March JRC MARS bulletin revealed that drought conditions negatively impacted vegetative growth, especially for the southern regions. Winter cereals in the southern parts of the Iberian Peninsula have been negatively affected by the drought and show suboptimal growth. In southern France and north-western Italy, crop development is still in the early stages and winter crops are not yet affected or are only slightly affected. Rain is also needed in most of the rest of Italy, as well as in Slovenia, Croatia, Hungary, Romania and south-western Ukraine to avoid a reduction in production potential. The cold and wet conditions along the Italian Adriatic coast, in Greece and Turkey delayed crop development, but favoured the restoration of soil moisture.
The JRC Global Drought Observatory (GDO), within its monthly report, highlighted how this severe drought has been affecting in particular the northern Italy and the Po River basin. In parallel, the European Commission report on ‘Drought in northern Italy – March 2022‘ offers an assessment of the development and impact of the four-month drought in the region. Apart from the expected damage to the agricultural season, competition for other water uses, such as agricultural irrigation, is likely to start earlier than usual.  In mid-March, the value of energy stored in Italian reservoirs was only at 28.2% of the total storage capacity, compared to an observed historical low (1970-2019) of 30.4% for the same period. Therefore, the current low water level in Italian reservoirs could aggravate the already difficult situation in the Italian electricity market, which is already experiencing record low wholesale prices due to geopolitical factors.
Overall, the ongoing drought is affecting, with more intense consequences, the energy system (e.g., hydropower storage) and the yield crop potential (water availability for irrigation), bringing to economic and socio-economic losses and damages at the local and regional scale.