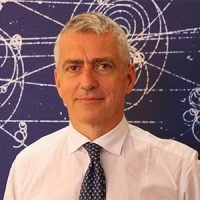 Antonio Zoccoli is full professor of experimental physics at the University of Bologna. Since July 1, 2019 he is President of the National Institute of Nuclear Physics (INFN).
Associate researcher of the Bologna Section of the INFN, of which he was Director from 2006 to 2011, since 2011 he was a member of the Executive Board and the vice president.

During his scientific career, he has always been active in the experimental field of fundamental physics, nuclear and subnuclear. Zoccoli is co-author of more than 700 scientific and technical publications in international journals.

Since the end of May 2021 he is appointed President of Big Data Association.