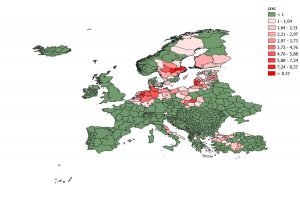 Fig.1 | Spatial distribution of anomalies in heavy precipitation and extreme wind speed for February 2022 as detected by the related E3CI components

About the Dudley, Eunice, and Franklin storms
Dudley, Eunice, and Franklin storms were an intense extratropical cyclone, part of the 2021-2022 European windstorm season. Between February 16th and 21st, some regions within Europe were successively hit by these three large scale weather systems. Following days of intense storms, many countries were flooded, and disruptions were reported.

E3CI components on PRECIPITATION and WIND
The E3CI indices that were analysed to check whether the spatial distribution of the hazard was appropriate, concern heavy precipitation and extreme wind speed. The maps show the areas more impacted (dark-red colours for the most affected regions, and light-red colours for those still affected, but with lower values). In relation to wind, all the regions recognized as impacted, are characterized by E3CI values higher than 1, while for precipitation (as expected) just some of those are highlighted with red colours. Overall, this implies an adequate representation of the here mentioned phenomena by the index, on both components.

Impacts and Damages
Damages was found in several sectors as well as in several areas.
According to EM-DAT inventory, 23 deaths (16 deaths were reported in the Irish Republic) were reported after the Eunice Storm occurring in the different Countries while the injured people were 31 (28 in Northern France). Wind peaks up to about 200 kph were registered in UK, 180 in Germany and 150 in Czech Republic. In UK, all rail services were suspended throughout Friday in Wales. Millions of properties and businesses were left without power at the storm’s peaks. The storm Dudley disrupted the air and the ferry traffic. In addition, hundreds of properties were damaged, there were widespread road and rail travel disruptions, more than 400 flights cancelled or delayed, and hundreds of trees and power cables were blown over.

The Exacerbated Impact of  Storms Dudley, Eunice and Franklin in the UK – https://www.ambientalrisk.com/impact-of-storms-dudley-eunice-and-franklin-in-the-uk/